Over the past couple of years, rising anti-immigrant sentiment in the nation has led to a torrent of complex fears, anxiety, and trauma for immigrants and those who support them. This current narrative exemplifies the volatile US immigration history that includes numerous historical markers that have placed restrictions on immigrants. As Paik and colleagues (2014)pointed out in Teachers College Record, many of these restrictions had been removed by the 1965 Hart-Celler Act, particularly those excluding people from non-white majority countries. As these new immigrants settled, many entered community colleges. Current immigrant flows are also predominately composed of people from non-white majority countries, and many of these individuals have accessed California’s Inland Empire (IE) community colleges. This is not a surprise since community colleges typically provide ample opportunities to support the success of local communities in numerous ways including functioning as cultural centers, building the local workforce, stimulating the local economy, and preparing the next generation of first responders and health care providers (e.g., nursing, police, and fire).

Recently, though, tensions have occurred that have affected the climate in the country and on many community college campuses. Yet, the recent election and potential changes in designations for immigrants have caused those of us who teach, work, and study at California’s IE community colleges to not only experience fear but also to explore opportunities for hope that can be mobilized into action to support immigrant students.

As professionals who work to address the unique needs of California’s diverse community college population, we have direct experience fielding questions about the impact of changing immigration policy on the lives of the students we serve. Our journey and reflective dialog began among the four of us because of engagements with students experiencing climate challenges on our campuses. At the time of our dialogs, our group of scholar-practitioners’ higher education roles included a counselor and a district-level compliance officer who were also EdD students at University of Redlands (UR) (which is also in the IE), a UR faculty member in the EdD program and former student affairs educator who works on immigrant issues in higher education, and a campus dean who also adjuncts at UR. The conversations among the four of us were rich and compelled us to collectively offer a response. And, since IE community colleges serve diverse immigrant populations whose lives are directly affected by the shifting landscape of US immigration policy, we realized how critical it was to capture the current community college climate because it can provide insight for faculty, staff, and administrators in their support of immigrant students across the country. Most important, the suggestions and ideas from this reflective response can help community colleges and their stakeholders provide leadership in their communities and on their campuses to support immigrant students in the continuously shifting climate and landscape. 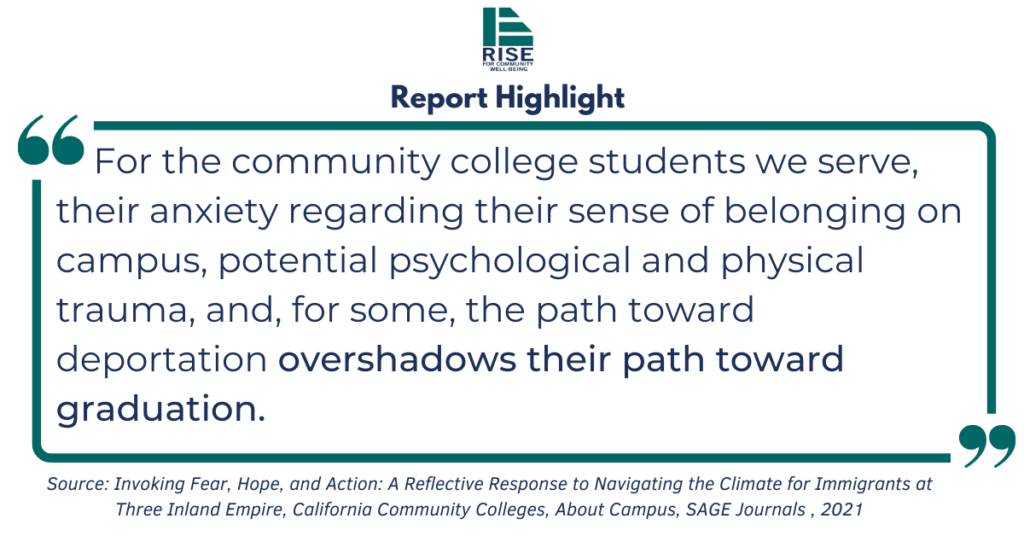