Senate Bill 946 was a major victory for California street vendors. Signed into legislation in September of 2018, SB946 implemented state-wide decriminalization of street vending. Before this important legislation, California street vendors were subject to over-policing and harassment from local authorities. Known as the Safe Sidewalk Vending Act, SB946 loosened regulations and established street vending as a legal activity. Street vendor advocacy is directly linked to immigrant justice efforts. Because of the relatively low start-up costs, many low-income and immigrant communities consider street vending as a possible employment opportunity. However, once the costs of permits and licensing, equipment and facility rental fees, and food supply start adding up, street vending becomes a less plausible route towards economic mobility.

Just as vendors were previously troubled with the variability and ambiguity of criminal laws in the past, vendors are now subject to the ambiguity of varying fees and rents. Not only could one vendor be paying significantly higher fees and rents than their competitor, but they also have no way of knowing whether or not those costs will be the same from one week to the next. Many people are required to take out loans and pay rents to comply with the law, burdening them with debt and cutting into their profits.

As college students in Claremont, the issue of street vending accessibility directly affects our neighboring communities. Pitzer College is located right outside of the Inland Empire, home to many immigrants from Latin America who cannot afford to live in Los Angeles County. Despite our proximity, the Claremont Colleges are relatively disconnected from the immigrant communities of the Inland Empire. Only once we stepped outside of our higher education bubble could we understand the issues surrounding immigrant justice in the Inland Empire and throughout California.

This semester we interned with the Inland Coalition for Immigrant Justice (ICIJ), helping facilitate programs and produce resources to support economic stability for the local immigrant population. ICIJ promotes street vending as a plausible solution for economic mobility. Much of our work has revolved around presenting effective city ordinances to local governments, such as the San Bernardino City Council, that would improve conditions for their street vending population. As a grassroots organization, ICIJ does not have the funding to support all of its constituents with start-up loans. Although the coalition promotes street vending as a viable employment option for their community, they cannot finance all the permits and commissary costs. Instead, they support local vendors through their advocacy. Working with ICIJ has demonstrated the importance of creating a team dedicated to street vendor support; the economic burdens of street vending on immigrant and low-income communities can no longer be overlooked. Through our time at the organization, we have become committed and passionate about street vending accessibility, which would support immigrants both in our neighboring communities and throughout the state of California.

The Inland Coalition for Immigrant Justice is a leading organization that serves the Inland Empire’s immigrant community. The coalition consists of over 40 immigrant justice groups, including faith-based, legal service, and worker’s rights organizations. According to their website, ICIJ organically formed in 2008 when Rutilio del Riego, a Roman Catholic Auxiliary Bishop, called for the convening of immigrant leaders throughout the Inland Empire. ICIJ inspires collective action to protect immigrant rights in the IE. Among ICIJ’s partner organizations is The California Immigrant Policy Center, ACLU Southern California, and the Immigrant Center of San Bernardino. ICIJ is a multifaceted organization, advocating grand policy reform to improve widespread conditions for immigrants while also providing on-the-ground aid and response to individual cases of detention and deportation. The organization provides two distinct services to further its mission. For one branch, they focus on community engagement, cultivating close ties with members of the IE through workshops and forums. They’ve created an Emergency Response Network, a hotline that documents cases of immigrant enforcement activity and sends out volunteers to observe the actions of ICE and Border Patrol. Policy advocacy is the other branch of ICIJ’s work, protecting immigrant rights at local, state, and national levels through lobbying and organizing.

Javier Hernandez has been the acting director of ICIJ since 2015. However, as interns, we work more directly with Lyzzeth Mendoza. Lyzzeth is the Community Engagement and Policy Associate: she works on policy initiatives and passing of ordinances throughout the IE, such as SB946. The coalition is currently leading campaigns on a range of issues, including health care reform and stopping the spread of immigrant detention facilities. ICIJ also works to promote immigrant economic prosperity through entrepreneurship such as street vending.

As many of the staff members are locals of the Inland Empire, the organization has a strong partnership with the community. ICIJ relies on community voices to guide their decision making; a large part of the work is individual outreach. The coalition believes that the surrounding immigrant community—resilient after years of discrimination and displacement—can be the organization’s strongest asset. ICIJ does not work for the community, they work with it.

As of 2016, the immigrant population in the IE was 972,476 people or approximately 21.5% of the total population. According to the ICIJ website, the majority of IE immigrants (520,760) live in Riverside County. As stated in UC Riverside’s State of Immigrants in the Inland Empire report, Latinxs represent a “greater share of immigrants in the Inland Empire than in the rest of Southern California.” The report documents that Latinxs, specifically Mexicans, constitute 49% of the total IE population and 69% of the foreign-born residents. The other large immigrant demographic is Asian, constituting 6% of the total population and 19% of the foreign-born population. Of all immigrants residing in the IE, 466,566 are naturalized citizens and 505,910 are non-US citizens (Center for Social Innovation et al. 2018). When the United States first took control of California in the mid-1800s, Mexicans and Asians were subordinated in the Inland Empire under a white agricultural elite. Through the Trump Administration’s recent immigration policies, Mexicans have now been further downgraded to illegal aliens (De Lara 113-26).

This paper was originally inspired by the San Bernardino City Council reconsidering their street vending policies. ICIJ initially asked us to research city ordinances throughout the country that promote vendor success which spun into this final project. First, we will review the available literature on street vending in the U.S., identifying where there are gaps in the research. The methods section follows, outlining how we collected and analyzed the data. Next, we will discuss our findings and determine what policies most effectively support the street vending economy. We hope that ICIJ can use this research to guide San Bernardino’s future policy construction and implementation. 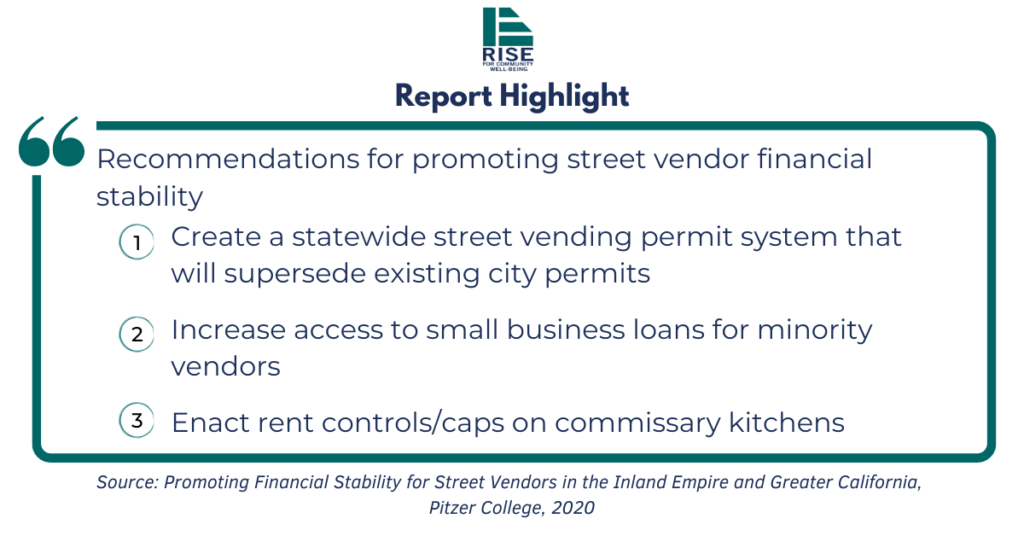