This study uses content analysis to explore local newspaper framing of air quality issues in the Inland Empire. The adoption of Assembly Bill 32 (AB 32) in 2006, concerning the reduction of greenhouse gases (GHG) in California, is used as the start year for this study. AB 32 was the first major piece of legislation in the state to establish GHG emission reduction goals and recognize the connection between emissions and climate change. The study uses a deductive approach to identify four – conflict, economic, health, and responsibility – predefined frames in stories about local air quality issues published in The Press-Enterprise, The San Bernardino Sun, Coyote Chronicle, and Chino Champion from 2006 to 2020. Throughout the study period news stories varied from coverage of state and regional regulations to local land use and development, findings suggested that this affected the number of articles published. Results found the responsibility and conflict frames to have the highest overall average use. The responsibility frame was largely used to assign blame, while the conflict frame was used to discuss contention over legislation and development. While the change in average use of the responsibility frame remained largely consistent over the study period, the change in the average use of the conflict and health frames experienced the greatest fluctuations. Further analysis found that these changes were triggered by certain events, and that economic conditions affect the use of a frame. Over the course of the study, the use of the health frame experienced an increase in use and was used to describe the proximate effects of air quality in the region. Though there is a disconnect between the health implications of air quality and the action needed to address the issue, greater coverage of these implications could increase public understanding, advocacy, and support of proposed regulatory action 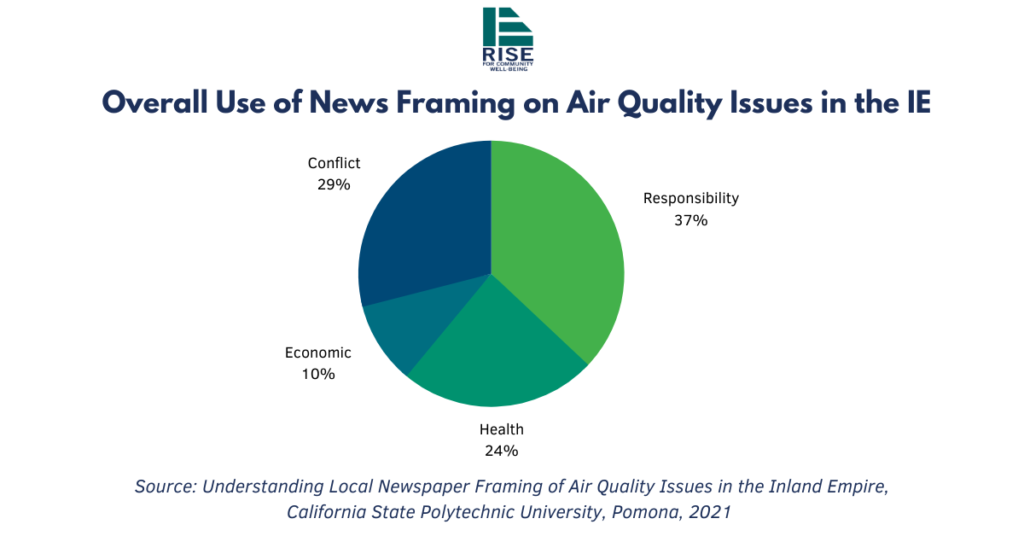