Environmental Justice (EJ) framing must be at the forefront of city planning and community development. In disadvantaged areas with predominantly communities of color, it is especially important to address EJ concerns. There are currently EJ components entering policy and regulations, which lead to funding opportunities to address these issues such as the Transformative Climate Communities Grant. To understand how EJ is being addressed in a specific community in the Inland Empire, I interviewed three main groups of stakeholders in the City of Ontario. These stakeholders included city government workers, city planners, and members of the community organization Huerta Del Valle. Four themes arose throughout all of the interviews: the emphasis on community involvement, city government involvement, organizational limitations and navigating power relations. Within these themes, the stakeholders noted key challenges in communicating and creating change, which include majority Spanish speaking communities, low- income neighbourhoods, economic development, food deserts, private vs public land, and low- education attainment. In addressing these barriers and injustices in general, I found that local city governments have a lot of power and influence over the framing of environmental justice in their city. They can either support these endeavours directly funding community organizers as seen in the city of Ontario, or prioritize economic development and other issues, which is the more common outcome especially of smaller more conservative cities. 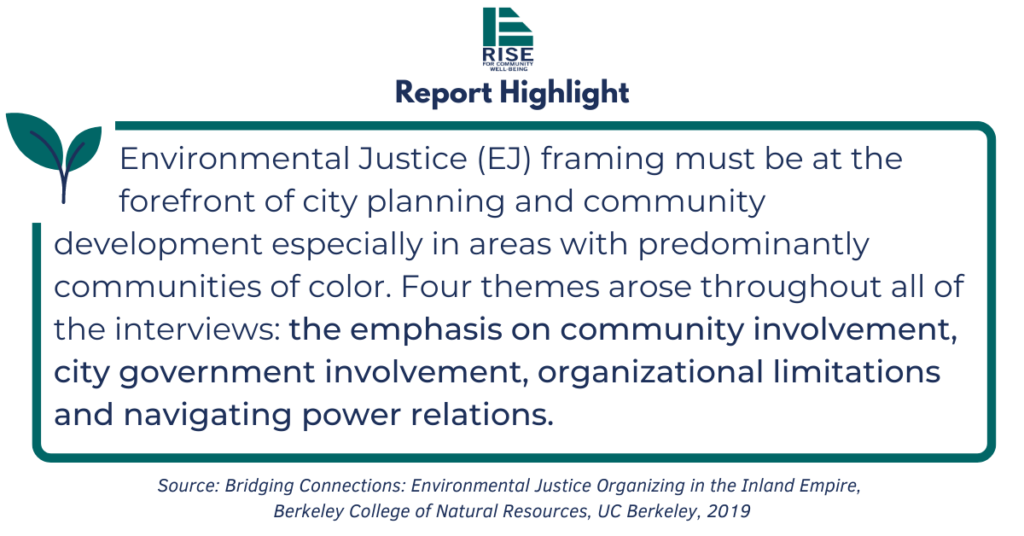