Anyone who has paid attention to economic conditions since the Coronavirus downturn in early 2020 knows that the economy has sent mostly positive but also some mixed signals during the current recovery. To be clear, this is a common occurrence during economic recoveries. For example, at the national level, economic activity as measured by inflation adjusted Gross Domestic Product (GDP) typically experiences a full rebound months or even years before the labor market is back to full health. Here in Southern California, the geographical unevenness of the recovery is typically reflected in different trajectories across the region.

But make no mistake, the economy is in a sustained recovery mode, it has nearly made up the ground lost during the pandemic shutdown of 2020, and it will continue to improve in 2022. Let’s look at where things stand for the Inland Empire right now, with one eye on 2021 and the other towards the rest 2022.

One of the most widely cited indicators of well-being is the unemployment rate. During past cycles, the Inland Empire was often the first to see its economy turn south and the last to recover (“First In, Last Out”), but this time it’s different. Similar to elsewhere, the Inland Empire had unemployment skyrocketing in the span of a couple of months during the onset of the pandemic, exceeding 15% at one point. But by the end of 2021, due in part to its booming logistics sector, unemployment fell to 5.1% (seasonally unadjusted; it is 6.5% when we seasonally adjust it), more than a percentage point below Los Angeles County’s 6.2%. 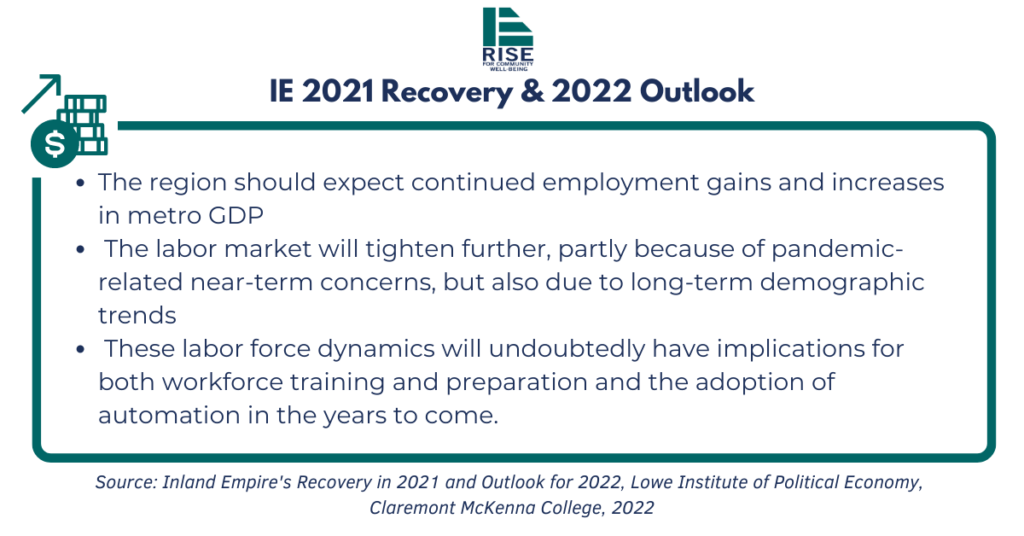