Publication: Georisk: Assessment and Management of Risk for Engineered Systems and Geohazards

This paper presents a quantitative framework to optimize embedded footing performance subjected to extreme historical climate events with respect to the uncertainties associated with site-specific soil and climatic parameters. The proposed framework is developed based on partially saturated soil mechanics principles in conjunction with a multi-objective optimization algorithm called Non-dominated Sorting Genetic Algorithm (NSGA-II) to develop a robust optimized design procedure. The proposed method was applied to two semi-arid climate sites, Riverside and Victorville, both situated in California, United States. The results show that the proposed method generally improves the embedded footing design compared to conventional methods in terms of cost and performance. Based on the findings, under the extreme climate conditions, the proposed method estimates the average soil degree of saturation within the footing influence zone between 52% and 95%, with a mean value of 63.1% for the Victorville site, and 57% and 90% with a mean value of 81.6% for the site in Riverside. It is also found that the optimal design from the proposed method shows a lower total construction cost, 44% and 19%, for the Victorville and Riverside sites, respectively, compared to the ones designed by the conventional methods. 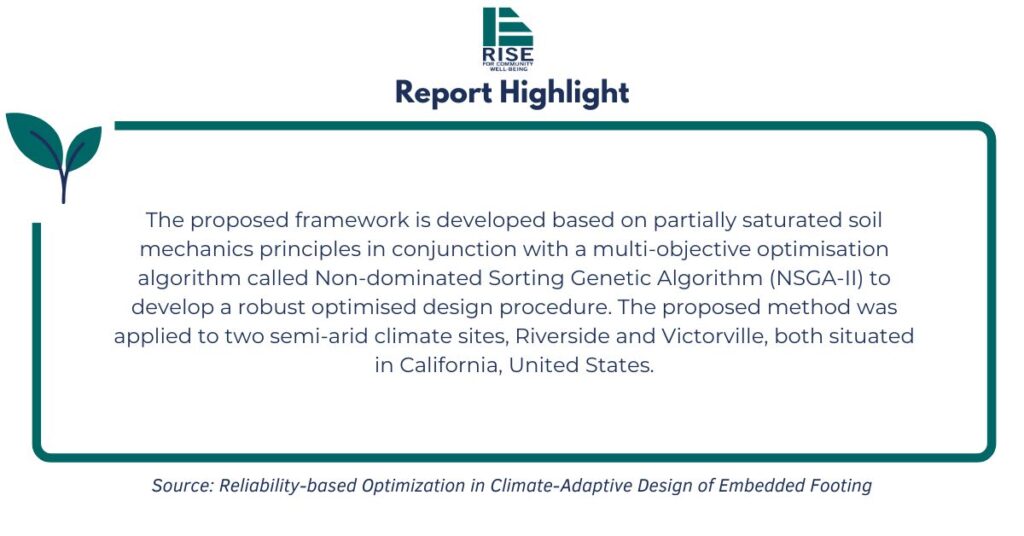